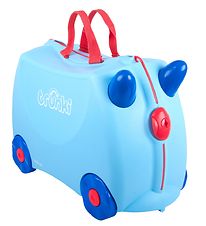 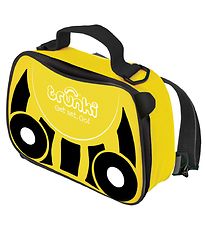 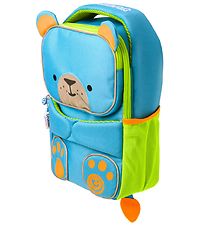 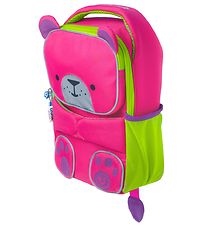 Trunki produces fun and innovative travel products for kids when the family goes on a trip! Trunkis suitcases are particularly ingenious and well-known, as kids can sit on them and drive while holding on to the handles. It makes the experience at the airport even more fun. The suitcases are available in many designs in the most beautiful colours, so there is a model for all kids.

Trunki consists of a team of people who are dedicated to inventing fun travel products that put smiles on both kids's and parents' lips.

Trunki believes that travel is about new experiences, and making the journey itself as wonderful as the destination. All products have the functionality that parents need, but the opportunity for play and personality that kids love. Trunki creates products for kids for all travel, both for a day at the zoo or for a rejse on the other side of the globe.

It started with a light idea in the year 1997 - Rob Law participated in a university competition where one had to design luggage. He got the idea to create ride on suitcases for kids, and that's how the idea for Trunki about.

He also won the competition! In the year 2003, Rob signed a contract with a toy company, but it did not work, so he decided to be in charge of the project himself. In 2006, the first Trunki cardboard suitcase was released, and by 2013, two million copies had already been sold. Trunki is produced in England and is sold day in over 100 countries.

With that said, we hope you find something in our range that matches whatever you're looking for. Whether it is just conscious that you have clicked into our Trunki category - the range is at least large, and contains a lot of smart suitcases and nursery bags.

Therefore, you must finally click your way to the selection in the others categories with everything from kids's clothes, kid's shoes and interiors to the kids's room.