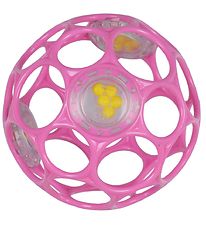 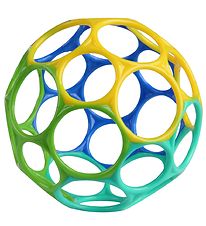 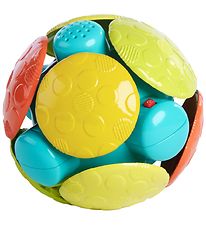 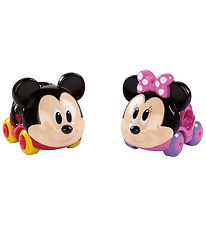 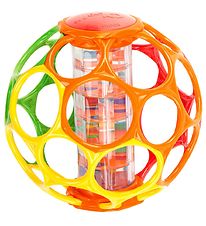 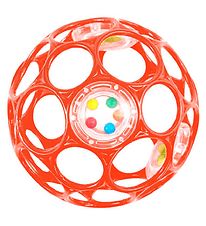 Oball is a brand that produces interactive, educational and original toys for the youngest kids that inspire both kids creativity and development.

It all started with a simple toy, the ball. The original ball was such a big hit that Oball was able to develop and produce a wide range of toys. Today Oball offers everything from balls to toy cars, all in many beautiful and inspiring colors.

Oball produces a variety of different rattles in modern colours that are also environmentally friendly and in non-toxic materials. Find your next rattle from Oball here at Kids-world.

At Kids-world we grant you with a wonderful assortment of Oball baby toys and many other labels.

It's a good idea to consider the different Oball baby toys and the other labels if you'd like to find more ways to support your little boy or girl's development.

At Kids-world you will find a fine range of Oball baby toys. It ensures that there's a toy for every kid in various designs, price ranges and components.

Check out the popular Oball rattle-ball and other balls

The rattle balls and the other balls from Oball are well known. They are amazing toys for newborns thanks to the many holes in the balls. It makes the balls easier to grab for a newborn baby as well as to throw, shape, chew and much more.

The balls consist of elastic plastic rings with holes around them. The balls offer endless entertainment for the youngest kids. It is a perfect gift for toddlers and newborn babies.

A ball is always a fun toy. The balls from Oball are great toys that can be used by both girls and boys of all ages. You´re never too old to play with a ball.

Here at Kids-world, we offer you a fantastic selection of clutching toys from Oball and many other brands. Regardless of your girl or boy's age, you should have a great opportunity to find the perfect clutching toy from Oball for your boy or girl.

We are sure that our filter will help you while searching for the perfect Oball clutching toy for your little one(s).

We hope you will find the perfect Oball clutching toy for your girl or boy right here at Kids-world.

The toys come in many unique shapes and colors that stimulate the kid's mind and creativity. With Oball you get unique toys for the youngest kids which ensures a good and educational experience that lasts a long time.

Oball also makes some nice toy cars that can be used by little and bigger kids. Since the toy cars have the same small holes as the rattles and balls, kids will recognize the style of the cars from the other toys.

The cars are designed in the same colours as the other products. There are also cars that are designed after popular characters from various movies such as Monsters Inc and Toy Story.

If your boy or girl is interested in big machines like agricultural machinery, Oball also offers some nice ones toys designed after agricultural cars, trucks, trucks and tractors.

Do your kid's gums itch? If so, an Oball teether might be a great purchase. It can be a challenge once the gums start to itch and your girl or boy wants something to scratch back with.

On this page, you can see our entire fine selection of teethers from Oball for toddlers. There is something for every kid.

Oball teethers and teethers from other brands available on our webshop come in simple yet beautiful designs.

An Oball mobile can be used in many places and they work well as a calming element. A mobile from Oball can be hung in several different places, such as over the changing table, crib, bed or in another place in a kids room. It is up to you to choose the best place for it, in your home.

Mobiles from Oball can also be used to create peace and security in your little ones room. It can also be good to have one over the changing table if your kid does not want to lie still without having something fun to watch.

Here at Kids-world you will also find a large selection of many fine hanging toys. These are perfect for the car seat when you are driving. Your kid has something to look at, grab and chew on, without the toy falling on the car floor.

If you cannot find the right mobile or hanging toy from Oball, take a look at the other brands here in our webshop. We sell many nice and smart products and we have something for everyone.

Buy new products from Oball in our shop

We hope you find what you are looking for from Oball in our shop. Our range is large, and we have many nice toys from Oball. Look through the different categories to find nice rattles and balls with the well-known small holes.