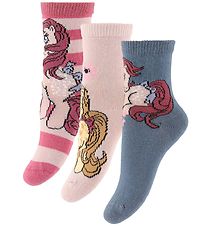 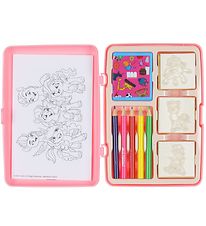 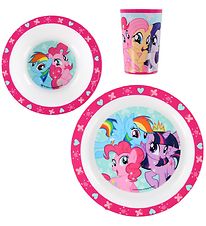 My Little Pony is a world-famous phenomenon that began as a series of toys and a TV series in the 1980s. My Little Pony is owned by Hasbro. Here at Kids-World we offer many products from the My Little Pony's franchise, which all fans of the series and toys will love.

All about My Little Pony

The first generation of My Little Pony toys was developed by Bonnie Zacherle, Charles Muenchinger and Steve D'Aguanno and launched in 1981. The ponies are colourful and cute with different symbols on either side of the body.

The fourth generation was released in 2010 at the same time as the TV series My Little Pony: Friendship Is Magic began airing. This made My Little Pony more popular than ever before. The series is about pony friends and their magical friendship and their adventures together. The series has become well known and extremely popular around the world among both kids and adults.

Here in the category you can see our fine and versatile range of dinner set from My Little Pony for baby and kids. We carry a fine selection of spouts, spoons, forks, knives, plates, etc. for kids.

A large set of our spoons are ergonomic designed thus that they fit perfectly in the hand of your boys or girls.

It can be difficult for babysitters and kids to hold on tight to a cutlery, so of course that is what My Little Pony in mind, who has a habit of creating some nice and practical kid service.

Here at Kids-world we have a nice selection of dinner set from My Little Pony and many others brands, so you can be sure to find something that suits you and your child.

Buy new toys from My Little Pony in our shop

If you have any special requests, you may want to see some other products from My Little Pony in our online store so please feel free to contact our customer service with your wishes.