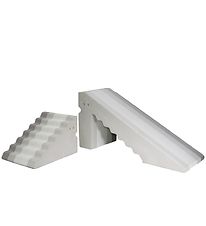 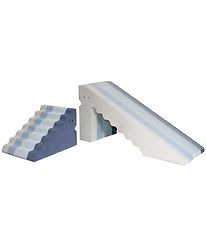 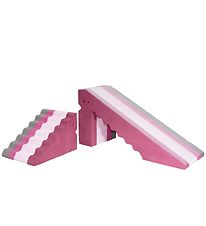 On this page you will find the popularbOblesdino, which with its characteristic appearance has become a hit with many children and parents.

bObles Dino consists of two foam figures; a large and a little. The figures fit together if the large is placed correctly on the other. There are many hours of play with bObles Dino, which can be placed on the floor in several different ways, all of which give rise to fun play.

The very young children can lie obliquely up the sloping back of the dino. If the little ones are a little more daring, they can use the back of the bObles dino to slide down. The back can also be used as a sloping tray, which they, with the help of a hand, can try to walk up. There are a myriad of ways the dino can be used - it is only the imagination that sets the limits here.

The dino can of course be used with others tumble furniture from bObles.

bObles Dino is perfect for play and tumble

BObles has done a lot to make the bObles Dinosaurs fun for the kids to play with. It should preferably be such that children naturally sheep want to move by playing with the furniture.

bObles The dino is Danish designed