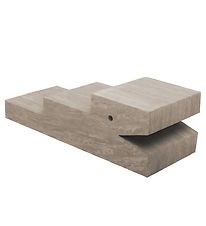 The crocodile from bObles, like many of the others products from the Danish brand, is very popular with children. bObles crocodile is designed to look like a crocodile, while challenging the senses of both large and small children.

The smaller children can practice climbing stairs, jumping from the different heights from the crocodile's sloping back and try to keep their balance when the crocodile is waiting on its head.

bObles The crocodile can be combined with others porpoises

The BObles crocodile thus invites children of all ages to play and have fun, and the crocodile can of course be combined with others of bObles' many cute and fun foam figures in the many beautiful colours, so the child sheep even more play opportunities while practicing and developing their motor skills..

Here at Kids-world.com you can buy the popular bObles Crocodile. bObles crocodile has long been one of the best-selling porpoises from bObles.

bObles Crocodile is perfect for play and tumble

BObles has done a lot to make the bObles Crocodiles fun for the kids to play with. It should preferably be such that children naturally sheep want to move by playing with the furniture.